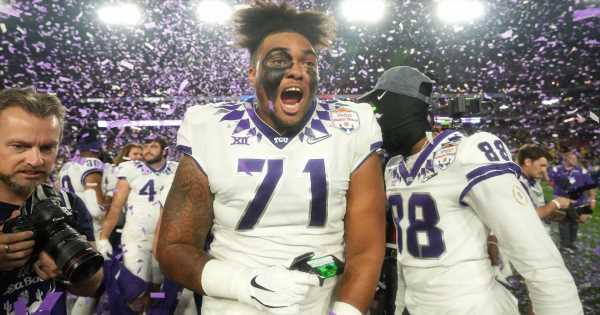 The NCAA title game on Monday involves two football teams from states — Texas and Georgia — where sports betting is illegal, but efforts are underway to change that.

Lawmakers in those states are making another run early this year at legalizing sports betting.

In other states throughout South, bills to authorize sports wagering are expected to come under serious consideration again in 2023.

On Monday, the TCU Horned Frogs (Fort Worth, Texas) and Georgia Bulldogs (Athens, Georgia) square off in the CFP National Championship game at SoFi Stadium in Inglewood, California. Kickoff is at 7:30 p.m. ET.

At Caesars Sportsbook, TCU is a 12.5-point underdog. The Over-Under is 62.5 total points.

With the NCAA title game set for Monday, the immediate focus on potential new sports betting laws is on Texas and Georgia.

In Texas, the nation’s second most-populated state with 29.7 million residents, sports betting legislation will come up when lawmakers meet in Austin on Jan. 10.

Senate Joint Resolution 17 by state Sen. Carol Alvarado, D-Houston, would legalize sports betting and a limited number of big-city casinos, pending a two-thirds vote in both legislative chambers and a statewide public vote on Nov. 7, 2023. These votes are required to amend the Texas Constitution.

Dallas Cowboys owner Jerry Jones has said legal sports betting is inevitable some day in Texas, but Jim McIngvale of Houston, a multimillion-dollar sports bettor known as Mattress Mack, told Gambling.com resistance from religious groups will probably keep sports betting from being legalized in the near future.

Georgia Lawmaker Confident This is the Year

In Georgia, the state’s professional sports teams support sports betting, but efforts to allow mobile wagering and other forms of gaming have been unsuccessful.

This year, state Rep. Ron Stephens, R-Savannah, said he thinks the time is right to approve sports betting and more forms of gambling.

For that to happen, legislators would need to approve two bills, according to what Stephens told Georgia Public Broadcasting.

One bill would require a constitutional amendment legalizing sports gambling, horse racing, and casinos. Another bill would detail how gambling revenue would be spent.

Lawmakers convene Jan. 9 at the Gold Dome in Atlanta.

“We walk away from $100 million every year in sports gambling, and other states, and places like Antigua, get that money from people here in Georgia,” Stephens said. “Let’s regulate it, tax it, and put the money in Hope (education scholarships) and pre-K.”

Nationwide, sports betting is legal in 32 states and Washington, D.C. On Jan. 1 this year, Ohio became the latest state with legal sports betting.

Currently, the South contains the largest block of states without legal wagering.

Only four of 11 states with universities competing in the Southeastern Conference allow sports betting. Those states are Tennessee, Arkansas, Mississippi and Louisiana.

The number of SEC states will go up to 12 when the Oklahoma Sooners enter the conference. Sports betting also is illegal in Oklahoma.

This week, gaming news in Oklahoma and Missouri put those states in the sports betting spotlight.

In Oklahoma, Gov. Kevin Stitt tweeted that he supports sports betting, if it is “fair, transparent, and the state can maximize revenue potential to invest in top priorities, like education.”

Last year, Rep. Ken Luttrell, R-Ponca City, attempted to pass a bill that could have led to on-site sports betting at tribal casinos. Oklahoma does not have nontribal casinos.

Next door in Missouri, this year’s legislative session began Jan. 4, with three sports betting bills already in play. The bills await committee consideration before possible votes on the House or Senate floor.

Last year, despite support from Missouri’s professional sports teams, sports wagering legislation failed to win approval, in part because of a dispute over regulating video lottery terminals. That disagreement is expected to become part of the debate again this year.