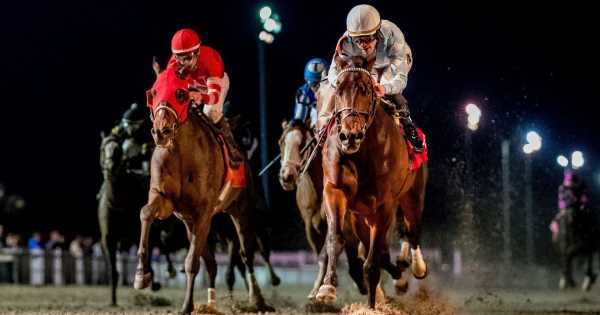 A points-based system determines which 20 horses will load into the Churchill Downs starting gate on the first Saturday in May. Generally, the prep races that offer the most points are the most impactful.

A total of 37 races comprise the USA Road to the Kentucky Derby schedule. The first 21 of those races is considered the Kentucky Derby prep season. These are the earlier races, which stretch from September of a horse’s 2-year-old season through February after they become 3-year-olds, and award fewer points.

The remaining 16 races are part of the Kentucky Derby Championship Series. These races, run from late February through April, generally offer the highest point values, with the winners and runners-up usually guaranteed entry into the Kentucky Derby field.

The top Championship Series races offer 100 points to the winner, 40 for second, 30 for third, then 20 and 10 for fourth and fifth. Usually, between 30 and 40 points is needed to qualify for the Kentucky Derby, though in 2022 long shot winner Rich Strike accumulated only 21 points (he hadn’t qualified to run in the Derby until Ethereal Road was scratched the morning before the race, opening up a spot).

For horses competing outside the U.S., there is also a Japan and European points path to the Kentucky Derby.

So which are the most important U.S. races to consider when assessing the long list of Derby preps in 2022-23? Let’s break down the best in three separate points categories.

Holy Bull Stakes (Feb. 4, Gulfstream Park): The Gulfstream Park championship winter meet is one of the most competitive in the U.S., as several of the top northern-based stables send their horses to Gulfstream for the winter. The Holy Bull is the first serious Derby prep race of the year in South Florida. In 2022, four horses from the Holy Bull reached the Kentucky Derby field, including top three Holy Bull finishers White Abarrio, Simplification and Mo Donegal (who went on to win the Belmont Stakes). The Holy Bull points distribution is 20-8-6-4-2.

These races are more difficult to separate, with each offering a clear path into the Kentucky Derby field with a win or second-place finish. In some years, even a third-place finish is good enough. All eight offer a points distribution of 100-40-30-20-10.

Florida Derby (April 1, Gulfstream Park): The signature race for 3-year-olds at the South Florida track has produced 15 Florida Derby-Kentucky Derby winners, including three in the past 10 years (Orb 2013, Nyquist 2016, Always Dreaming 2017). And that doesn’t include Maximum Security, who crossed the wire first in 2018, but was disqualified for interference. The timing of the Florida Derby — five weeks before the Kentucky Derby — is favored by trainers.

Santa Anita Derby (April 8, Santa Anita): Ten winners of this Southern California race have gone on to win the Roses, most notably Justify, who won the Triple Crown in 2018. The race commands the respect of bettors — four of the last five Santa Anita Derby winners were sent off the first or second betting choice in the Kentucky Derby. Complicating the issue is Southern California-based trainer Bob Baffert is in the second year of a two-year suspension from Churchill Downs because of a drug violation on his horse Medina Spirit. Baffert has won this race nine times, but any horse he sends to the KY Derby in 2023 must be transferred to another trainer.

Blue Grass Stakes (April 8, Keeneland): The Blue Grass champ has not won the Derby since 1991, but the race was run on a synthetic surface from 2007-14, and has attracted more quality fields since returning to dirt. The 2021 Blue Grass winner Essential Quality finished third (elevated from fourth via DQ) as the Kentucky Derby betting favorite and went on to win the Belmont Stakes and Travers. The 2022 winner Zandon also finished third in the Run for the Roses.

Other High Point Races That Could be Big

The Louisiana Derby is the oldest Derby prep dating back to 1894, yet only two winners managed to win the Kentucky Derby, Grindstone the most recent in 1996.

The winner of the Wood Memorial at Aqueduct in New York has not won the Kentucky Derby since 2000.

The Jeff Ruby Steaks at Turfway Park in Florence, Ky., is run on a synthetic track and tends to be the least relevant of the points-rich preps, yet Rich Strike shockingly parlayed a distant third-place finish into Kentucky Derby lore at 80-1 in 2022.

The UAE Derby, run at Meydan Racecourse in Dubai, often includes several U.S.-based horses, but no winner has ever finished better than sixth in the Run for the Roses.