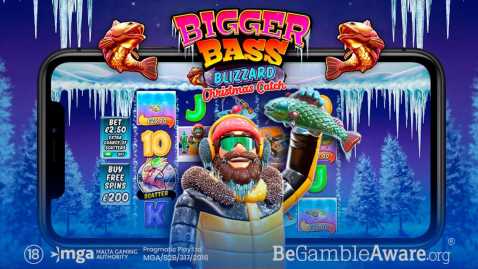 iGaming content provider Pragmatic Play announced Monday it is celebrating the upcoming holiday season with the release of its new slot, Bigger Bass Blizzard Christmas Catch, which is set in a winter wonderland. The title marks a new instalment in the Big Bass Bonanza series.

Played across a 5×4 set of reels, the slot sees iconic symbols return with a winter makeover as rods, reels, and snowmobiles fill the board. These are joined by fish symbols, each of which has an instant cash prize attached which can be awarded in the free spins round.

At least three scatter symbols are needed to land in the base game and unlock entry to the free spins round, with additional scatters awarding up to 20 free spins. Here, a wild fisherman is added to the reels, so that each time it lands, all instant cash prizes are collected.

Landing four of these wilds also grants a retrigger and an increasing multiplier, and the game can randomly award additional fish or hooks that reveal extra fisherman symbols, “further increasing the excitement and huge win potential in the game.”

Irina Cornides, Chief Operating Officer at Pragmatic Play, said: “The Big Bass franchise has always proven to be a go-to game for slot enthusiasts thanks to its cutting-edge features and thrilling mechanics.”

“Bigger Bass Blizzard Christmas Catch takes the gameplay to a new level with a revamped winter aesthetic, while building on the big win potential and progressive bonuses that have become an essential aspect of the series,” Cornides noted.

Last week, the company confirmed the signing of a new partnership with Peruvian operator Tinbet for three of its verticals. Under the terms of this deal, Tinbet’s customers will benefit from the provider’s slots, Live Casino and Virtual Sports content, featuring a vast collection of products that “are proven to boost player engagement.”