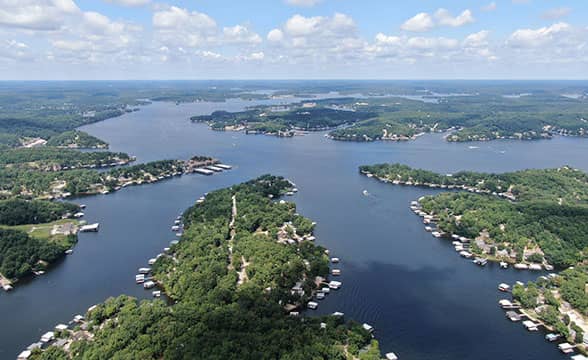 The Missouri government is once again trying to get a casino erected on the shores of the Lake of Ozarks. The measure was introduced by representative Jeff Knight and will be presented during the next legislative session.

The new legislation has been named HJR 23 and seeks to receive the government and Missourians’ approval for the development of a new casino near the Lake of Ozarks. If approved, the casino would be built on a 25-mile strip of Osage land from the Missouri River to the Bagnell Dam.

If lawmakers approve HJR 23, which they are expected to do, the measure will become a part of the state’s constitution. According to analysts, the Missouri government would likely pass the bill. If that happens, the measure will be presented to the people on Missouri, allowing them to have the final say on the matter. The bill will pass if more than half of the voters vote in favor of the new Ozarks casino.

Under normal circumstances, the public would be asked to cast their votes in November 2024. However, if the Houses pass the legislature, Mike Parson, governor of Missouri, may request the vote to be held sooner.

The Osage Nation Is Unamused

While many support the construction of a new casino, Tribal operators in the Show Me State are not thrilled by the idea. Many among them believe that a new commercial venue will greatly hurt their businesses and, as a result, have opposed the measure.

In addition, the Osage Nation, one of the tribal entities in Missouri, has acquired a portion of land that is located near the plot for the planned commercial casino. The tribe prepares to use the land for the construction of a tribal casino and had applied for a Class II gaming facility a year ago. Unlike its commercial competitor, the tribal casino would require federal approval from the Department of the Interior, instead of approval from the legislature.

Some are forecasting strong activism on the Osage Nation’s side during the upcoming legislature session. It is likely that the tribal entity will protect its interests and do its best to oppose HJR 23. Analysts believe that the tribe will lobby against the bill which will undermine its efforts to develop a tribal venue near the Lake of Ozarks.

In other news, Missouri failed to legalize sports betting this year. While there were prospects of wagering being greenlit in the state, the efforts ultimately failed and were postponed until the end of the year.