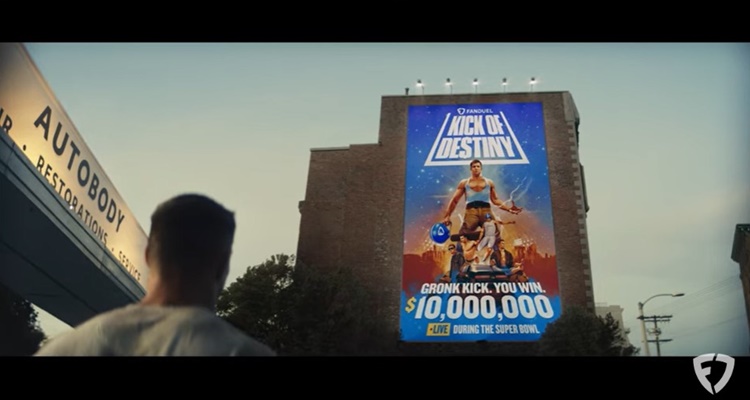 FanDuel Group, the North American tier-one online gaming company, today announced its unique “Kick of Destiny” campaign that will feature four-time Super Bowl Champion and five-time NFL Pro Bowler Rob Gronkowski. The champion will attempt to score a field goal during a live Super Bowl LVII television commercial, and the customers placing a Super Bowl bet of a minimum of five dollars on FanDuel’s platform will win a respective share of $10 million in free bets if Gronkowski scores the field goal.

Kick for $10 million in free bets:

FanDuel introduced the campaign with a series of spots featuring Gronkowski returning to football for the Super Bowl, his journey through NFL playoffs, and his legendary trainers and teammates. But the campaign will feature a live commercial during which Gronkowski will try to kick the field goal as he aims to win fans their share of $10 million in free FanDuel bets. Such an attempt brought to fans in the live transmission is expected to boost the excitement into the red.

Andrew Sneyd, FanDuel Executive Vice President of Marketing, commented: “Whether it’s a kick-off, a touchdown or an important play that will decide a season, FanDuel knows moments matter. Our first-ever Super Bowl commercial will be more than just a television spot – it will create a moment that will bring fans together, and give them something to collectively cheer for.”  Sneyd added: “It’s an unprecedented field goal attempt on live TV…so anything can happen.”

Fans involved in the campaign:

The innovative sports-tech entertainment company will advertise this historic campaign through a series of digital and promotional activities in Phoenix before the premium sports event. Fans will have the chance to get involved in photo shootings and purchases of signed replicas of Gronkowski’s sportswear, as well as to take their own ”Kick of Destiny” on-site at the Super Bowl Experience to try to win the FanDuel’s $25 bet, and alike.

“I spent my career catching the ball, but I always knew I could kick it and now I’ll do it live in front of football fans everywhere during the Super Bowl,” said NFL legend Rob Gronkowski. “With $10 million in free FanDuel bets on the line, I’m training every day to give fans something to root for and to watch the “Kick of Destiny” live on national television.”

Gronkowski has been an exclusive FanDuel brand partner since December. In addition to the “Kick of Destiny,” he will have an important role in the company’s marketing and promotional activities with frequent FanDuel TV appearances to suggest bets and review sportsbooks. FanDuel TV and FanDuel+ are broadly distributed on linear cable television, and the NFL legend will make appearances at various retail locations and FanDuel events for entertainment purposes, but also to raise awareness about responsible sports betting.